The Geelong Rifle Club was formed in 1865 by Geelong members of the militia forces and prominent citizens of the town. Shooting was a very popular sport at the time and every major industry and retail store had its own rifle club. Outlying districts such as Leopold, Queenscliff and Connewarree had rifle clubs, some having their own range, but most shot at Lime Burner’s point. The first of many achievements accomplished by members of the Geelong Rifle Club occurred in 1904 when J.C. Trigg of the Geelong Rifle Club won the King’s Prize and in 1910, the Syme Aggregate. The club had continuing success and a strong membership base until 1913.

Following the declaration of what became known as World War I, The club suspended all activities. As a result, from 1914-1918 there was no competition until in the early months of 1919 when the Militia 23rd Bn. reformed and the Geelong Rifle Club formed as a new civilian club. These two clubs were affiliated as were other areas such as Colac with the 21st Bn., Ballarat with the 8th Bn. and Melbourne with the 5th Bn. This affiliation meant that a member of a civil club signed a declaration that in the event of war, he would be available for home defence and was entitled to a certain amount of free ammunition for musketry practice. The two clubs also held a combined annual Competition, shot at the Merrett range with teams consisting of 8 men from each club.

Once again, with the outbreak of WWII, there was no club activity between 1939 and 1946 after which the club reformed its committee, this time having no connection with the Army other than that the Army laid down safety rules and supervised the rifle range. Up until 1976, Geelong Rifle Club used the 26 target range at Lime Burners point as their home and held many very successful prize meetings with a membership base of around 40-50+ members strong. In 1978, after a concerted effort to retain it, the range was lost to the C.S.I.R.O. Animal Research Laboratory who built their facilities on the land; The Club had lost its home.

The Club temporarily shot at Werribee, Williamstown and for a few years at Birregurra until in 1981, a suitable site was found at Gum Flats Road in Anglesea. In the following years, A 6 target 900 yard range was built by a handful of dedicated members and the club held its inaugural prize meeting at the new range in November 1984. Club membership grew once more and the club had many happy years at The Gum Flats Range with members being successful at home and away.

Around 1999, 18 years after the club established itself at the Gum Flats; the issue of tenure reared its head once more. The club held a license granted by the commonwealth for use of the range which was due to expire in the early years of the new millennium and upon investigation of an renewal of this license the club was informed by the Department of Natural Resources and Environment (DNRE) that such a renewal would not be forthcoming. This effectively meant that the gum flats range would be closed at the end of 2002 and the club was forced to relocate yet again.

In an effort to save the club, many options were investigated and eventually land suitable for a range was found near Lara and the option of a rifle range was explored. With much optimism, while acknowledging the risks, the committee and members of the Geelong Rifle Club voted to proceed with the development of a new range to secure the club a long-term home. Over a period of 4 years, a new range was constructed while the old range at gum flats, Anglesea was dismantled; this involved a lot of labour intensive work and considerable costs.

While many costs were involved in constructing the range, members frequently volunteered their time to aid construction of the new range, removal of the old range and use of their tools and equipment, most notable among many, Mr. Neville Trevena. However, it wasn’t all smooth sailing as the construction of the new range was also met with resistance from the community and sections of local government and the project inevitably ran over budget. Fortunately, funds were raised and the issues regarding licensing of the range were resolved and the new range at Anakie was officially opened in February 2004 and over the ensuing years, many improvements have been made to the range to further benefit members of the club, the most significant being Electronic Target installation on all ranges, and club members continue to assist in the maintenance and improvement of the range and club facilities.

The East Anakie rifle range stands as a Testament to the efforts of many working towards a common goal – The establishment of a home for and securing the future of the club.

Since the turn of the millennium, an apparent rekindling of interest in shooting sports has occurred and the Geelong Rifle Club is now in a good position with new and young members joining the club. With a stable but growing membership base and a solid financial position, the Geelong Rifle Club appears to have a bright future ahead of itself and the current membership looks forward with optimism as the future unfolds… 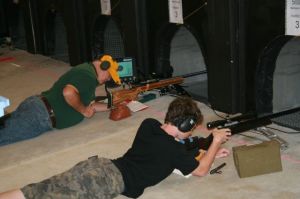